“In 5 years, I would like the walls in Poland to be clean and to create a trend that shows people that hate speech and intolerance are not acceptable,” says Joanna Grabarczyk, the project coordinator of the Hate Stop campaign of the Polska Association.

The Hate Stop is a campaign dedicated to removing hate speech from public spaces. The problem is widespread; hateful inscriptions and graffiti can be found in all Polish towns – on buildings, fences and pavements. People of different races, religions – especially Jews and Muslims – and LGBT (lesbian, gay, bisexual, and transgender) persons are the most common targets. Although most Poles do not agree with these hateful messages, the reasons behind the racism, homophobia and anti-Semitism are complex:

“Poland is a rather homogenous country and has only been a free society the last 25 years. The interaction of cultures is not popular among all groups of society. Most of the prejudice – like –anti-Semitism is invented and not grounded in real historical events, but in distortions,” Joanna explains.

“This campaign gives people an idea of the scope of the problem,” Joanna says.

The objective of the project is not only to create awareness, but also to make people act. A website has been established where volunteers and the general public can take pictures and report about instances of hate speech in public spaces. Around 730 reports on hateful graffiti in the public sphere have been submitted to the police or local authorities, out of which around 300 have been painted over. Around 75 of these were painted over by through the Hate Stop campaign. Joanna believes the current legislation needs to be changed:

“We report the instances to the police, but law enforcement is not yet sufficient. There is a need to change the law so that the owners have to remove hateful graffiti from their façades. We also need to make public money available to help those who cannot afford to remove the graffiti themselves.”

One specific incident six months ago of hateful graffiti close to the Polska Association’s offices illustrated how painting over hateful messages has a preventive effect. The office is located close to a Nigerian restaurant and the area has a large African community. When the restaurant was vandalised with racist graffiti, members of the local community – both Poles and people with minority backgrounds – were mobilised.

“Through social media we were able to gather around 50 people and paint over the graffiti 24 hours later. Since then, it has never come back,” Joanna says.

“We have an open house where many school children are doing their homework. Two 12 year old boys were expressing homophobic and anti-Semitic views. We sat down with them and talked about it, and now they are active in our campaign painting over hateful graffiti.”

More info about the project>> 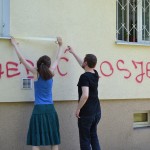 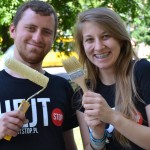 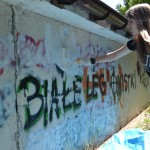 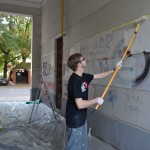 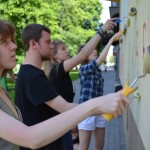